It's raining. Tokujirou Yasumori phones young police officer Takami to watch out for flooding due to the river swelling. Takami then heads up to the new Kanemasa mansion to meet the newcomers to the village.

Councilman Ishida meets with Dr. Ozaki and junior monk Seishin to discuss the recent deaths. The doctor suspects an epidemic, but doesn't know the root cause of the disease.

Natsuno is on his way to school, when he is hailed by Tooru in a passing car. Ritsuko is giving him driving lessons. Natsuno hops a ride with them. They see Tooru's brother Tamotsu walking with Masao , and invite them too, but Masao won't ride with Natsuno and takes off.

Seishin is musing over the deaths, when Sunako arrives, coming up the stairs to the temple. She has read all of his novels, and was looking forward to meeting him. Looking so young, he addresses her with -chan as the honorific to her name - "Sunako-chan". This gets him a sharp rebuke. She notes the scar on his wrist, and says tht such an injury won't kill you.

Dr. Ozaki gets the blood test results for Nao. It's anemia, like Megumi's, which confuses him. He sends nurse Ritsuko to have Nao come back in to the clinic.

Nao arrives at the clinic, brought by her husband Mikiyasu. She is deathly tired, and barely breathing. The doctor notes insect bites on her arm. Worried, he has nurse Yasuyo prep the EKG, and orders up an ultrasound as well. The doctor downplays the seriousness to Mikiyasu, but questions him about who they might have met recently, that she may have caught the disease from. Mikiyasu says that they met the Kanemasa newcomers Seishirou and Chizuru Kirishiki on the day the Yasumori families were celebrating the bon festival. Mikiyasu's sister Junko invited them to join the party, although everyone was pretty drunk already, but the Kirishikis declined. Nao then invited them to drop by her home instead. Dr. Ozaki knows how sick Nao is, but lets on to Mikiyasu that everything is fine, and sends them off to the university hospital where he knows she will die.

Nao is dead. They hold her funeral straight away on Sunday.

That evening, Natsuno hangs out at Tooru's house. Masao pops in to tell the news about Nao. They discuss dying so young, and it ends up in a fight between Masao and Natsuno. Afterwards. Tooru heads out to get something at the vending machine across the street, where he runs into Tatsumi, who says he would be happy to stop in for a visit... 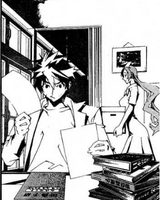 Nao was happy at the bon festival

Mikiyasu brings Nao to the clinic

"I happen to have a back scratcher with me"