Jinrou are more evolved versions of the Shiki

Jinrou (人狼), also referred to as werewolves by certain characters, are a subspecies of shiki present in the anime, manga, and novels. They are considerably rarer than regular shiki and are generally superior, as they lack most of the key weakness afflicting the former- vulnerability to sunlight, a diet strictly limited to blood, and involuntary loss of consciousness at daybreak, among others.

While they are indeed a variation of the vampires most abundant in the series, they are not truly undead as, according to Tatsumi, humans who become jinrou experience transformation at the brink of death rather than reanimation postmortem. Due to their resistance to sunlight, heightened senses, and general ability to easily blend in with humans, the jinrou working for the Kirishikis serve as daytime lookouts and commanders of the shiki forces in the anime, manga and novels.

Despite being referred to as werewolves, jinrou are not actually lycans or shapeshifters. Sunako refers to them as werewolves due to the fact that, in fiction, vampires are often accompanied by werewolf familiars. Despite the roles of servitude all jinrou demonstrate in the series, as well as unwavering loyalty to their causes (i.e. Tatsumi and Seishin stalwartly protecting Sunako, and Natsuno giving his life to eradicate the shiki), they are stated by Tatsumi to be superior and 'perfect' compared to typical shiki, as he considers them to be failed results of human-vampire transformations.

It is not clear exactly how or why some humans rise up as jinrou rather than typical shiki, though Tatsumi explains to both Masao Murasako and Natsuno Koide-Yuuki that they are 'special' compared to the latter; thus, it may be the case that those who rise as jinrou rather than common shiki have unique qualities that others lack. This said, they are created through the same means as normal shiki, via fatal blood drainage by shiki and a personal inclination to return from the dead. The only differentiating factor established in the series is that that jinrou transformation occurs right on the brink of death, whereas resurrection as typical shiki occurs days after the passing of an individual. However, there is also the possibility that jinrous are created because the victim submitted willingly to the shiki at the first bite since the next bites happen along a sort of mind control.

Jinrou can be created via the bites of other jinrou or shiki, and it is unknown whether or not the odds of one transforming into one is impacted at all by which bites him or her, as one of the series's jinrou was solely attacked by a typical shiki whereas the other was shared between another jinrou and a shiki as a human.

Jinrou, like shiki, possess certain attributes that set them apart from living humans. Just as is the case with the latter, they have retractable fangs that extend from their canines prior to feeding and at will, they benefit from drinking blood, and they are many more times superior to regular humans when it comes to their senses and durability. They overall look far more human than regular shiki, as their skin is much less pale (though still notably more so than humans) and their hair colors don't change. Additionally, their eyes don't change into the typical black with red irises until they are feeding or experiencing strong emotions. The eyes of jinrou, however, are noticeably different in darkness, as the irises are luminescent, giving them a general animal-like appearance, while lacking brightness and glimmering in the light.

Generally speaking, jinrou lack the weaknesses afflicting common shiki. They can walk in broad daylight without any suffering any consequences, they don't fall asleep involuntarily at sunrise, they can survive on ordinary human food, and they look far closer to living humans- even possessing vital signs (breathing, pulse, body heat, etc.)- allowing them to blend in with and live among them more effectively. For these reasons, they are often considered superior to their undead counterparts, and have so far been seen assuming roles of servitude and leadership to the latter due to their strengths.

While jinrou do not require blood to survive, and are presumed to remain immortal either way, their special abilities will only manifest once the jinrou drinks human blood. Once this is done, they gain senses (especially smell) far superior to both humans and common shiki, increased physical strength, speed, and durability, and, presumably, accelerated healing. Jinrou are able to see in the dark just as shiki do, and are able to determine through their smell who will rise from the dead and roughly when, using their heightened sense of smell.

Unlike shiki, they are able to remain awake during both the daylight and nighttime hours, and are more resistant to religious objects and places. As stated above, they don't look undead to the average person and are able to live among humans with little trouble or risk of being discovered.

Because jinrou transforms into such much faster than a shiki resurrecting, their minds are much more closer to a human rather than a shiki, this allows them better cover in a mass of humans compared to their ordinary counterparts. Like in the case of Tatsumi, jinrou can display great darkness in their behavior, though unlike shiki, jinrou can cover up such things much better. Also because jinrou transforms before fully dying, they have better restraint over themselves than ordinary shiki where they're remorseless like shiki but they're as careful as humans. In the case of Tatsumi's and Yoshie's roles among the shiki, they can be seen as leaders, both having more authority and duty than normal shiki. Because they're not as carefree as shiki, jinrou are far more mature and smarter than their normal counterparts and thus are better planners along with displaying more patience. This can be seen as Natsuno quietly planned the destruction of the shiki alongside Toshio while maintaining complete calmness in his actions as opposed to shiki being recklessly impulsive that led to the war between the humans and shiki. In fact it can be seen that the only moment of true anger and emotional outburst displayed by a jinrou is when Tatsumi was angered by Natsuno's calmness towards his disposition that can lead to the exposure of shiki while almost all the shiki in the series were impulsive and showed more outburst than normal. It can be presumed that a jinrou's emotions and personalities are also heightened in the same manner as shiki though to a lesser extent as they have more control over themselves due to being alive rather than undead.

Because jinrou are technically living shiki they are able survive on normal human food rather just blood for normal shiki. This is shown when Tatsumi was able to drink coffee like a human when ordinary shiki can only consume human blood. However their source of strength are also blood like shiki and if they don't consume human blood after their transformation, they will get weaker though they won't die from the starvation of blood. 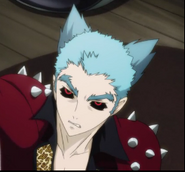