"Hey, turn off the lights! And stop honking!"
―Kanami to Tatsumi[src]

Her father died while she was in high school. After that, Tae worked hard in the fields to save for Kanami to go to college. Later on, Kanami moved to the city and got married. When her marriage failed, she went back to Sotoba and Tae supported her. Tatsumi comes to Chigusa late at night and wakes Tae and Kanami up looking for Sotoba. Kanami tells him that he is already there, and he apologizes for waking them and says that he's moving to Kanemasa. After he leaves she remarks to Tae what strange people are moving in. Later, Tae dies and becomes a Shiki. She finds her way back to Chigusa and meets Kanami. Kanami hides Tae in Chigusa. Motoko comes to Chigusa and finds out about Tae and promises Kanami not to tell anyone. However, she later unknowingly revealed this to the villagers, who broke into Chigusa and killed Tae. After this incident, Kanami leaves the village while the Shiki extermination continues.

Kanami on the bus leaving Sotaba with a recovering Yuuki 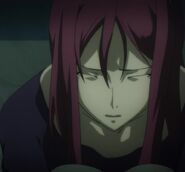 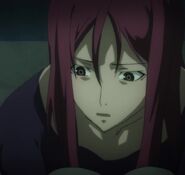