Kaori is a kind and friendly girl who doesn't realize the fact that Megumi Shimizu has grown to dislike her.

Megumi Shimizu's 15 year old childhood best friend, though the sentiment is one-sided on her part, as Megumi hates the Sotoba villagers in general and secretly doesn't think any more highly of Kaori, though she never showed it knowing that Kaori deeply cared for her. Megumi appreciated that Kaori accepted the fact that she was different, but knew that Kaori never truly understood her and looks at her the same way as the rest of the village. After Megumi's death Kaori was devastated and seemed to be the only one who felt that way along with her parents. As the days go by, she begins seeing the people, who were once dead, walking around the village at night. Together with her brother Akira, she becomes friends with Natsuno, who's also known that the people who were once dead are in fact alive. Along with the Tanaka children, he's been seeing the Shiki walk around at night, primarily Megumi whom had a big crush on him They later on go into investigation about the Kirishiki family and the strange events that were happening in the village.

Kaori and Akira are the first ones to notice Natsuno has been bitten by a Shiki and tries to warn his father. However, Mr. Yuuki disregards their advices, which eventually leads to Natsuno's death at Tohru's hands. Later, when Megumi gets wind of Kaori's increasing intimacy with Natsuno, she attacks Kaori's father and turns him into a Shiki. Kaori's father starts targeting his family and she fears for her life cowering in her house but she suddenly finds courage and finds her father entering the house, she is shocked for a moment but in an emotionless state she beats him to death, while Natsuno watches her outside the house, ready to protect her if he needs to.

She and Akira try to sneek out of the house but their mother catches them. She asks where they're going. Akira says "outside" so she tells them not to go out too long, as they need her at the funeral home.

As they walk along the rode, Akira seems happy. Kaori doesn't understand how he could be and says that she might not want to. She thinks it's wrong and they shouldn't.

He becomes agitated and tells her to stop acting like a scared child. She says that she is a kid, as is Natsuno. Believing in vampires is one of the most childish things you could believe in. She says that she's not going to dig up her friend over something so childish. He says that she can just go home then. He and Natsuno will do it themselves.

Kaori and Akira aren't awakened like usual by their mother. They go to her room to tell her that they're leaving. She is still and bed and seems sickly. Kaori realizes that her mom has been attacked and so does Akira.

Akira knows it's Megumi and says that she'll probably attack the whole family. He plans to go to Mizube to get amulets. He tells her to get wood for stakes.

While in town, the four elders ask why he isn't in school. He makes up an excuse and they pity him. They begin gossiping and laughing about other deaths in the village. Akira asks how they could laugh about something like that. They says that they don't think it's funny and they're just as concerned. They just don't know what to do. They continue to gossip and Akira storms off. As he goes, he hears that Iwao Maeda was seen in Tamae Itou's house.

Back at home, Kaori is making stakes. Akira takes one and runs off. He goes to the Itou house to find that it's boarded up to keep sunlight out. In the closet, he finds Iwao sleeping. He takes out his stake and hammer. Before he stakes him, Tatsumi stops him.

He awakens tied up with tape over his mouth. It's nighttime and Akira struggles and tries to break free. Iwao wakes up and smiles at him as Akira tries to scream.

She goes to the temple where she is greeted by Seishin Muroi. He remembered her from Megumi Shimizu's funereal. She is greatful that he remembers her and says that people outside said that she should go to the temple for her request. She asks if he could give her a kaimyou (戒名). He is confused and asks if she is mourning someone. She tells him that her whole family is dead and she knows that she's next and wants one for herself as she is ready to die. He says that people do get them while still being alive. She begs him to give her one because she somehow made Megumi Shimizu angry and she'll kill her next. She already dug her own grave and just needs her name to finish. He says that people don't know how long they're going live and that there is no such thing as cheap lives regardless of whether she chooses to welcome death or run away from it.

At her house, she sits in the closet with Love. She's shaking and crying while grasping a baseball bat. She asks her father and brother to protect her, as she knows Megumi Shimizu is coming to kill her.

When Natsuno appears to her, she thinks he is also one of the shiki trying to kill her and faints. Natsuno catches her in his arms and smiles, satisfied to see that Kaori has become brave and never stopped fighting for her survival.

In the anime, she was hospitalized with her brother alive asleep while she sees Natsuno before facing off with Tatsumi. In the end, she is last with her brother in bus where they see Yuuki and Kanami, but she's glad to see them awhile feels better and returned to her old self again

During Megumi Shimizu's funeral, Kaori worries about what to do with Megumi's postcard. As she thinks, she sees Natsuno walking up. She begins to cry and run towards him. She bows deeply and thanks him for coming. She tries to give him the card to him, but he refuses and leaves, upsetting her again.[1]

After killing her father, Natsuno catches her.

She is Megumi's best friend. They grew up together, and Kaori adores Megumi, oblivious to the fact that Megumi has grown to dislike her, although in the original novel and manga this is due to Megumi being better at concealing this fact from her.

After Megumi's death, Kaori tries to give Natsuno the postcard that Megumi wrote for him. She is very happy for Megumi that he came to her funeral.

As they bury her, Kaori is crying and mad that other villagers are still gossiping about her. As they bury her body, Kaori asks to throw the birthday gift she bought for her before she died. Though her mother scolds her, Seishin Muroi says that it would be a good idea. 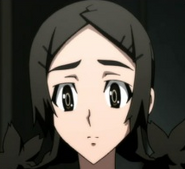 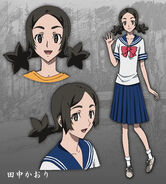