On October 14 she starts to rises and on October 15, he calls one of his employees to tell them that he's going to close the clinic. He says it's because Kyouko isn't doing well but he is actually just experimenting on her. While on the operating table she wakes up, terrified. He tries to give her anesthetics, though nothing works. She begs for him to stop. He tests various things, like trying the use of religious figures and various things to kill her, such as cutting vital arteries. Through the whole thing, he narraates to a video camera what he is doing and finaly comes to the conclusion that he must either cut off her head or stab her in the heart. He stabs her in the heart with a stake, killing her. 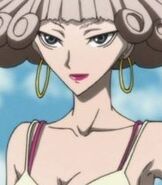 Kyouko's dead body
Add a photo to this gallery

Retrieved from "https://shiki.fandom.com/wiki/Kyouko_Ozaki?oldid=15628"
Community content is available under CC-BY-SA unless otherwise noted.