"I beat you, old man."
—Motoko's last words
"Why that fucking old man have to take Shihori and Shigeki with him?...He don't left me anything!"
―Motoko reffering to Iwao[src]

Motoko Maeda (前田 元子 Maeda Motoko), also known as Moto-chan, is a protagonist of episode 21.5 and a major pivotal character overall as she is the one who sealed Sotoba's fate in the end and started the fire that destroyed it. She was a young housewife from Lower Sotoba and worked in Chigusa. She was Kanami's childhood friend, Isami's wife, Iwao's and Tomiko's daughter-in-law and Shigeki's and Shihori's mother.

Even before Shiki arrived, Motoko was extremely nervous, fearful, unhinged, unstable, neurotic, paranoid and xenophobic and had a habit of chewing her fingers each time she was especially anxious (shown in the manga). She was very nervous about the national highway, feared and disliked any outsiders, and didn't want them to come to the village. She was also extremely dedicated to her children, Shigeki and Shihori, and was completely obsessed with their safety. She forbid them to play near the highway as she believed the outsiders will take them away or harm them in any way. She was mostly indifferent towards Isami though, as his death didn't faze her that much, aside from increasing her general fear and anxiety. She also always despised Iwao and Tomiko, though she hid it initially. Her condition visibly worsened when people around her started to die and she started to fear for her children even more. After Iwao became a Shiki and killed her entire family, Motoko's condition culminated in insanity.

Motoko befriended Kanami when they were children. At some point, she married Isami Maeda and had two children, Shigeki, and Shihori. She lived with her family in Lower Sotoba, and worked at Chigusa with Kanami. One day, Motoko walks Shegeki and Shihori to school. She stands and watches to make sure they're safe before going to Chigusa. On the way to Chigusa, she sees Megumi and Natsuno. She walks into Chigusa, and greets Kanami, Hiroko, and Sachiko. Kanami says that she's late by two minutes and that she's seen her standing watching her children. Sachiko tells Motoko that she's worrying too much and that highway passes away from her house and school. Motoko is still nervous. She says that outsiders are reckless and there are accidents. Kanami says that her kids are not stupid, and obedient, and that they're safe. Iwao becomes ill. Motoko suggests that he go to the hospital, but Iwao tells her that he's fine. Tomiko scolds her and says that she always worries needlessly. Motoko begins to say something, but Iwao demands that she shut up. He says that he's going to bed early and leaves the room.

Later, Iwao dies. Toshio comes to their house, looks over his body, and asks Motoko various questions about how he was feeling. Since he refused to go to the doctor, Toshio is now forced to perform an autopsy. Toshio and Tomiko begin to argue. Tomiko slaps Motoko and Toshio jumps in between them. Tomiko says that it's Motoko's fault for being so noisy. She begins crying and Isami comforts her. Shihori and Shigeki come inside. Afterwards, Toshio apologizes to Motoko for causing Tomiko to slap her. She asks about the autopsy and he says that he'll at least take some blood. Later, Isami too becomes ill. Motoko tries to get him to go to the hospital, but he refuses and Tomiko sides with him. Motoko phones the Ozaki clinic, and explains that Isami isn't looking well. Toshio agrees to check in on him. Isami dies and Motoko phones Kanami early in the morning to say that Isami looks like he's dead. Kanami comes to their house and tells Motoko that she already called Toshio. She asks where Tomiko is. Motoko asks if Kanami heard about the epidemic. She says that it must be because of the people moved in Kanemasa. Kanami says that the people in Yamairi died before that, so that can't be it.

Motoko begins to worry about her children even more and comes in their room. They ask if something happened. She says that everything's fine and starts to hug them. Kanami comforts her and tells her not to think about it like that. Motoko eventually concludes that it must be Iwao pulling her family with him. One day, Motoko wakes her children up for school. Shigeki gets up immediately, but Shihori lies in bed sickly. Motoko panics, picks up Shihori, and runs through town, carrying her. She comes to the Ozaki clinic only to find that it's closed. She slams her fist into the door and yells for Toshio, but no one answers. Yoshie comes up behind her and suggests that she go to the Ebuchi clinic that just opened up. Motoko goes to the Ebuchi clinic. She's uneasy that it is run by outsiders and that it's on the highway, but goes anyway, and finds that it's only open at night. She repeatedly slams her head into the door until it begins to bleed and yells for them to open up and help her child. A group forms behind her. Tomiko storms across the street and reprimands Motoko. She says that Shihori doesn't even have a fever. She asks Shihori is she's alright and she says that she's fine. Tomiko then scolds Motoko for again making a fuss over nothing while blood flows across her face.

Sometime after this, Shihori collapsed and Tomiko too began acting strange. Motoko asks Tomiko to watch Shihori while she goes shopping. Motoko walks over the bridge and sees Toshio resting on the shore. When Motoko came home, Shihori was dead and Tomiko was sleeping beside her. Motoko furiously kicked Tomiko in the back and screamed that it was her fault that Shihori died. Eventually, Tomiko died too. Later, Motoko held Shihori's funeral. She phones the Shiki's funeral bureau and asks them to pick up Tomiko quickly as she does not want to touch her, and there is a child in the house. After Tomiko's funeral, Takeko tells Motoko that Iwao was seen near her house and Motoko realizes that he's behind all the deaths in her family. She comes home and looks at Iwao's picture. Shigeki comes up to her and she sees him with Iwao's bite mark on his leg. She brings a phone and futon into the bathroom, and locks herself and Shigeki in there and promises to protect him. However, he still eventually dies and decomposes in her arms.

She still sits in the tub with Shigeki's body when Kanami calls her and informs her of Tae's death. Later, Kazuko and the others begin looking for her and come to her house, calling for her, she, however, mostly ignores them. Motoko eventually leaves her house and unknowingly joins the shiki extermination. She comes to Chigusa and learns Kanami's and Tae's secret that Tae is now a shiki and is hiding in Chigusa. She unknowingly betrays Kanami and Tae to the villagers, telling them about Tae, leading to Tae's death and Kanami abandoning the village. Motoko then becomes obsessed with finding Iwao and avenging Shigeki and Shihori. She starts searching for him all over the village, however, her efforts were in vain as Iwao was already killed by Natsuno. In the end, Motoko sets fire in Yamairi and to herself, proclaims to Iwao that she beat him and dies in a fire with a psychotic grin, officially wiping out the Maeda family. The fire that she started eventually serves as a major plot for the remainder of the series that burns the forest and entire village down.

Motoko with a dying Shigeki in the bathroom.

Motoko with a long dead Shigeki. 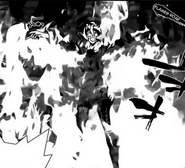 Motoko sets the forest on fire