Her real parents were addicted to alcohol and gambling. They ended up practically committing fraud and ran off somewhere. They left without her when she was six years old.

In the anime, she is to be burned in the sunlight, until Hasegawa mercifully stabs her so she doesn't die in agony. When Hasegawa finally reaches Nao, she looks up at him, her face already falling apart. She smiles, relieved to finally be freed from her pain. Hasegawa then runs a metal pole through her heart, finally killing her. 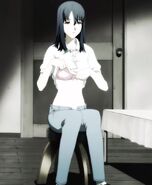 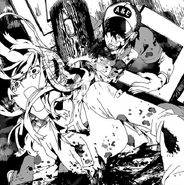 Retrieved from "https://shiki.fandom.com/wiki/Nao_Yasumori?oldid=17347"
Community content is available under CC-BY-SA unless otherwise noted.