Ritsuko Kunihiro (国広 律子 Kunihiro Ritsuko) is a nurse at Ozaki Clinic and the older sister of Midori Kunihiro.

Ritsuko has knee-length emerald green color hair that has spiral curls at the end and blue eyes.

She is either seen in a long white skirt and black high heel boots with black stockings and a blue blazer or a white shirt with elbow length sleeves with pink pants and brown boots but she is mostly seen in her nurse uniform that consists of a knee length white dress and white stockings and white shoes and she also has to wear a white nurse hat that clips with bobby pins to her hair.

Ritsuko is a very kind and caring woman who is desperate to help anyone who has been affected by the shiki and support families who have lost someone. She is always prepared to help the doctor and his patients. She is friendly to everyone and has never been aggressive or mean. She loves her dog, Taro and takes him on walks often, and that is how she got bitten. She has worked as a Nurse for years and loves saving lives, and this is why she refuses to kill someone for their blood, as she still considered herself to be a nurse and to continue preserving lives.

Ritsuko treated herself at home where she was suffocating and she called to her mother, but she wasn't there. She got up to go find her, but lost consciousness. She later regains consciousness in a shack in the mountains. Later, she gets bitten by Ryuuji Shimizu and Shuuji Gotouda before she dies. Then she is revived, waking up in the same cell everybody else did. However, she refuses to drink humans blood to live. For that, she slowly starts dying, while Tatsumi puts her in a cell with her co-worker whom she refuses to kill. She becomes mentally unstable as she yearn for blood, but still cares and lets her friend leave. She begins to hurt herself and cry constantly, because she would much rather die than live as a monster.

In the western mountains outside of Sotoba, Ritsuko awakens in a shack. She is soon greeted by Yoshie and Tohru. She realizes that they are risen as well. She recalls how she died to them.

As Yoshie doesn't have to explain things to her, she leaves the rest to Tohru Mutou. He is surprised and asks why he would when three more people could awaken. She says that she and Tatsumi are busy as it is and leaves.

First, he gives her clothes to change into and says that he'll wait outside. She won't accept them and says that since she's dead, her funereal kimono will do. She also says that she isn't going feed or kill anyone. He says that everyone says that at first but then everyone eventually surrenders to their hunger as it's too agonizing to bear. She says that her family must be dead as well.

She is staked in the heart like all the other Shiki, and Tohru stayed with her till the very end. He is seen in the last episode, to be laying on a wooden board with Ritsuko almost holding hands. They were both last seen when the village caught fire, burning all the bodies.

Ritsuko was a cheerful individual who maintained a good relationship with the people she was close to. She was friendly to all her co-workers and to her employer Toshio Ozaki. Her relationship with her family is also shown to be good.

Ritsuko was good friends with Tohru where they are often seen talking together and she also taught him how to drive that Tohru harbors feelings for her.

During the final moments of her life, he keeps her company. Although never established, it is hinted that the feeling was mutual in the end. 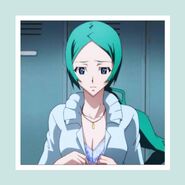