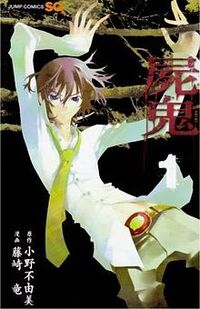 The chapters of the manga series Shiki (屍鬼) were drawn and written by Ryu Fujisaki (藤崎 竜) and serialized by publisher Shueisha in Jump Square magazine. The story is based on the novels of the same name by Fuyumi Ono (小野 不由美). It is about a remote mountain village which is plagued by bizarre deaths caused by what seems to be an epidemic. However, when Toshio Ozaki, the hospital dean, performs his own investigations, he discovers vampires, known as "shiki" ("corpse demon" in English) living in their midst.

Each episode is titled as part of either the Yuuki Natsuno story, or the Ozaki Toshio story, each of which has several chapters.  There's also a few sidestories thrown in for other characters.

The chapter numbering is done using characters for words that sound the same as the chapter number, being a phrase mostly related to death or the corruption of the physical body, both core themes in the series. Some these work really well, such as for Chapter 4, where they use 死 (shi), meaning 'death', which sounds like 四 (shi) meaning four. Others not so much, and are just a bad pun. Fortunately, on the manga page, the on'yomi (borrowed from Chinese) kanji involved have furigana (pronunciation aids) surtitles to help the reader with the intended pronunciation, kind of like explaining the joke. The titles in the chapter pages linked below give the chapter numeral, separated with ~ from the translation of the homophone / on'yomi words used for that chapter.

Dates are followed by the Rokuyo designation for that particular day. Each day in the Rokuyo sequence has a related good-fortune for the day. Follow the links to look those up. 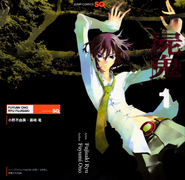 Volume 11
Add a photo to this gallery
Retrieved from "https://shiki.fandom.com/wiki/Shiki_(Manga)?oldid=17654"
Community content is available under CC-BY-SA unless otherwise noted.