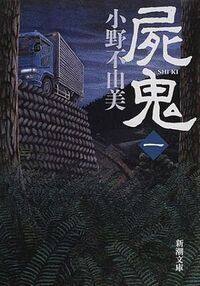 Shiki (屍鬼, meaning Corpse Demon) is a horror novel by Japanese novelist Fuyumi Ono, originally published in two parts by Shinchosha in 1998. It was later reprinted in five parts in 2002.

The novel was inspiration for the extensive Shiki manga series published by Shueisha from 2007-2011 and the Shiki anime series created by the studio Daume which broadcast 22 episodes and released 2 extras on DVD.

Retrieved from "https://shiki.fandom.com/wiki/Shiki_(Novel_Series)?oldid=16548"
Community content is available under CC-BY-SA unless otherwise noted.