"All right, that's settled. I'll wait in Natsuno's room. So? Care to show me the way? Huh? "
―Shizuka Matsuo to Yuuki

Shizuka is very impatient and easily angered. She often talks through her bunraku poppet. She talks down to people and is very rude to everyone. In the manga, she is shown to be incharge of making sure Tooru Mutou is educated properly. After scolding him, he snaps at her and she begins to cry. Though she puts on a tough demeanour, she is very afraid of the humans finding out about shiki and being killed again. One example is when she starts yelling to Yuuki when he tries to let her stay out of his house, eventually she threw the doll she was carrying which only proves how short-tempered she is.

She went to Natsuno's house with a doll while Natsuno was out then went to Natsuno's room with the permission of his father. When Natsuno got home, His dad said that he had a visitor waiting in his room but when Natsuno came inside his room, she was nowhere to be found. Instead, she used Natsuno's window to get out of his House.

When the war between the humans and the risen broke out, Shizuka tried to survive and escape the village. When humans raided Yamairi, she hid in a room full of dolls. Though Sadafumi Tamo didn't notice her at first, she began to burn in the sun, causing him to notice her. He came back and staked her to death. In the anime her death is never shown, but her body and doll are seen in Yamairi. They are also later seen burning in the fire along with the rest of the surroundings, with the doll's head falling off.

"If you don't do things accordingly, I will be scolded as well! You hear me!?"
―Shizuka to Tooru

In the manga, she is in charge of educating Tooru. She scolds him severely for not telling Natsuno not to tell anyone about him. She says that if he makes more mistakes, everyone will go after his siblings next. After snapping at her, she begins to cry. She is very worried that he will cause the humans to find out about her and she'll die again. 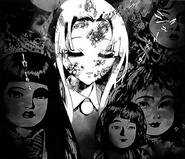