"I think death is equally terrible for everyone. Young people, old people, the good, the bad; it's always the same. It's rather fair in its treatment. There's no such thing as a particularly terrible death, that's why it's frightening. Your behaviour and age, your personality, your wealth, beauty, your personal beliefs; all the things that add up to make us who we are, they only matter while we're alive. Death makes every last one of them null and void. So any death is terrible."
―Sunako Kirishiki[src]

Sunako is a young, playful girl. She enjoys reading books and mentions that she enjoyed reading Seishin's work while cooped up indoors. Despite her appearance, she displays knowledge that a child her age would not possess and exhibits some levels of religious affiliation, especially on death.

In truth, Sunako is the leader of the shiki and the eldest of this group. She is mature and understanding, as she was a mother-figure to Chizuru.

Despite being a shiki, Sunako does not kill out of malice, but survival, and wants to create a safe place for the shiki so that they could live in freedom. She demonstrates great care for others. For example, she mourned Chizuru's death and was worried about Seishirou when he did not return to the mansion.

Sunako has the appearance of a young girl with dark purple hair, pale skin, and hollow black eyes. She usually wears Victorian clothing. When she was human, her eyes were brown.

Sunako was the beloved daughter of a well-off family. She also had a younger sister.

One day, her father's friend brought a guest to visit. The guest was a foreigner and ended up staying for a while. Back then, foreigners were rare and unusual, so her sibling were scared, but she was overjoyed.

Sunako and the guest became friends, though they could not understand each other and had to speak with gestures, which she thought it was fun. He was a Jinrou, so he could be out in day and there was nothing strange about him. However, soon people began dying and the man was forced out. Sunako was devastated that the man was going, so she decided to help him pack. That was when the man bit her.

Sunako awoke in her coffin, confused and terrified. She had been buried with a ceremonial knife, which she used to get out of her coffin. Someone heard her crying, rescued her, and took her home. However, Sunako was starving and attacked him. She went home and hid in one of the closets. She remembers burning, feeling very hungry, her father yelling, and her mother crying.

Sunako was taken to her family's second estate and hid in a storage shed. No one visited her, but she was sent servants to kill. There were also books for her to read. Sunako said that she felt like an animal and escaped to return home, but discovered that her family was gone and new people were living there. She searched for them, but eventually realized that her family had died a long time ago.

She lived many years alone, but later adopts a family in nomadic life. When she finds Muroi Seishin's essays describing a secluded village surrounded by death, she becomes a fan and decides to move to Sotoba.

Sunako plans to convert the picturesque town into a shiki village, so that her family can live in relative safety.

A thirteen-year-old girl moves into the Kanemasa mansion atop the hill with her family. She hides the fact that she is a shiki by telling others that she has a rare genetic disorder, which forces her to stay inside during the day. Sunako dislikes people calling her name with the honorific "chan" ("Miss" in the English dub).

Sunako plans to take over Sotoba by filling the town with shiki. Eventually, there will be no humans left and she can live in peace with her family. This leads to a war between the shiki and humans in the village.

In the final episode, she escapes the village with Seishin, who becomes a Jinrou.

While thinking about the village, Sunako calls out to Seishin and asks if he is Seishin Muroi. She says that she likes his books, to which he is slightly surprised because she is so young. She tells him that she loves reading and that her father has his books, so she borrowed them. There are six long novels and two collections of short stories. One of his works is about Sotoba. Sunako was able to find the village and where he lived. She says the village is like a big shrine and that it feels wonderful.

Seishin says that Sunako must be disappointed as he is probably different than she imagined. She agrees and says that he's more ordinary than she thought: she thought that he would have horns and a tail because he sounds like a man who's been abandoned by God. Even though he doesn't have the horns or tail, he has a scar. Seishin is shocked that Sunako knows this. She tells him that a person won't die from a simple cut on the wrist and walks away.

Seishin says that he believes his father is there and asks to talk to Sunako Kirishiki. Yoshie Kurahashi invites him in.

Later, Sunako Kirishiki is shown to have fed on him.

Sunako when she was alive 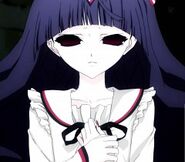 Sunako's Second Appearance In the Anime

Upset and Searching her family

Sunako looking over at the church 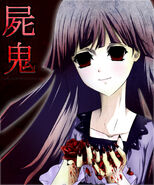 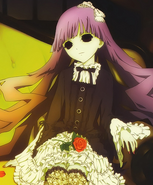