Takae is Toshio's mother, Ozaki's wife and Kyoko's mother-in-law. She is proud of the Ozaki family name and is domineering towards people, although she is somewhat helpful to Toshio. Atsushi, planning to kill Toshio, breaks into her house. Though she initially mistakes him for her son, she soon recognizes him. He had come many times to deliver orders and often did a poor job and she had scolded him before. She demands to know what he's doing in her house. She tells him to get out and says that she'll take pity and not call the police. When she's saying this, he can only see Namie in her and kills her in fury. 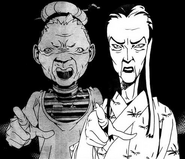