"At first, everyone is disgusted. Afraid to bear the sin of killing people. Afraid to receive punishment for replenishing themselves with the life of another. But, once you realize that you won’t be punished for killing people, you get used to the guilt pretty soon. The guilt of using humans for food. Aren’t humans the same?"
―Tooru Mutou

Tooru was a cheerful and outgoing young man with a happy-go-lucky and gentle personality. He was friendly and kind to anyone, whether they are locals, outsiders or strangers, a trait which has people, like Natsuno, open up to him, making him well liked by his peers. He also cares about his family and enjoys playing video games.

After his death and becoming a Shiki, he retains his gentle personality, yet loses his cheerful and positive exterior as he becomes torn by guilt and self-loathing. This is due to his thirst for the blood of his loved ones and neighbors; and to acting on said thirst for survival, despite his prior attachments. Though he tries to suppress his urges, his bloodlust inevitably consumes him, making him a reluctant killer. He falls into deeper guilt when and after he kills Natsuno, having chosen to do so after Tatsumi threatened to attack his family. This results in Tooru becoming cynical, bitter, and depressed.

"I wanna ask her to go on a drive with me this weekend, but I'm too nervous..."
―Tooru[src]

Though she's older than him, Tooru had a crush on her and wants to date her. He's too nervous to actually ask her, though, and wants Natsuno to come with him. He is reluctant, but ends up agreeing.[2]

Tooru has blonde hair with light brown eyes and fair skin color. He was always wearing a white T-shirt and brown, short pants and sandals. After his death and becoming a Shiki, his skin become pasty white with black eyes with red pupils. He wore mostly long-sleeved shirts with pants.

Tooru is Natsuno's closest friend in Sotoba. Tooru is a well-liked guy in the village of Sotoba and has many friends. He still lives at home together with his parents and his younger brother and sister (Tamotsu and Aoi). Tooru usually hangs out with Masao and Natsuno. He learns how to drive from Ritsuko Kunihiro, a nurse working at the Ozaki clinic who is older than him. He is in love with her and asks Natsuno to accompany him to ask her out on a date. Tooru is also fond of playing video games.

Tooru met Natsuno when he walked passed him with a flat tire and offered to fix it for him. Natsuno refuses but Tooru insists. After getting another flat some days later, he visits Tooru again. Because Natsuno's last names are too confusing, he calls him by his first name which Natsuno doesn't care for. Ever since then, the two became friends.

After Megumi's death, Natsuno is unable to sleep well at home because he still has the feeling that she's watching him. Natsuno tends to sleep over at Tooru's place during this period.

One night, Tooru is thirsty and walks over to a vending machine but loses his 100-yen coin, which rolls under the machine. A stranger called Tatsumi, who just started living at the Kanemasa mansion offers to retrieve it using a backscratcher. Tooru is grateful and offers him to drop by sometime. Tatsumi asks if he can bring a friend and Tooru agrees. Some days later, Natsuno stays over again. In the middle of the night, Natsuno awakens and knows that Megumi is entering the house and climbing the stairs. When the door swings open and it's Tooru's sister Aoi, Natsuno is relieved and believes he has hallucinated the whole thing. However, Megumi is hidden under Tooru's bed and rises up while Natsuno watches the whole thing in shock, not moving an inch. Megumi says she really hates Tooru for being closer to Natsuno than she ever was and bites him. Natsuno wakes up, soaked in sweat and immediately attends to Tooru, who seems to be perfectly fine. Natsuno sighs in relief knowing it was all a dream. Or was it?

Before attending Tooru's wake, Natsuno receives a late summer greeting card from Megumi which he tears up. Natsuno is very quiet at the wake and asks Tooru's parents of he can see his face. He offers them his condolences. After the wake is over, Masao accuses Natsuno of having no feelings because he didn't cry and starts a fight. Masao is chased out of the house by Tooru's siblings.

A few days later, Natsuno, who has discovered the existence of vampires and is determined to fight them, is visited late at night by a mysterious person outside his window. Natsuno believes it's the vampire he encountered earlier when he was digging up Megumi's grave. However, a familiar sounding voice urges Natsuno to open his window. It's Tooru, who has also risen from his grave. Seeing Natsuno face to face, Tooru makes a run for it. Natsuno chases him even though he knows it's a stupid thing to do. It turns out that Tatsumi has ordered Tooru to kill Natsuno. If he refused, Tatsumi would attack Tooru's family instead. Tooru is very conflicted and Megumi offers to do the job for him. Natsuno encounters both Tatsumi and Megumi on a road, who are closing in on him. But he is instead grabbed by Tooru from behind, who sinks his teeth into his neck.

In the manga, Tatsumi noticed that Tooru didn't even drink any blood at all and punishes him by biting into his neck suggesting that shiki are probably able to feed off one another, but starving the one who is bitten. Tatsumi knows that Tooru holds on to his humanity and starving him is the best form of punishment.

Seishin spots Tooru behind a tree. Tooru begs him to stay away from him. Seishin asks that he comes out so he can see him, but he won't because he can't face him. He can't forgive himself for killing Natsuno, his best friend. He says that he didn't want to, but they threatened his family and he had to chose between Natsuno and them. Seihsin tries to comfort him because he didn't have a choice, but Tooru says that he said they could run away together. He says that even now, he just attacked someone else. he doesn't want to kill, but he gets so hungry, and he'll die. He loses all control and attacks. Seishin apologizes and Tooru again asks him to leave him alone and forget their conversation. Seishin that no one can blame him for wanting to live as it's natural to fight for your life.

Afterward, Natsuno becomes furious, telling him to act more like a vampire and less like his human self. Seeing how conflicted Tooru is with himself, Natsuno offers Tooru his blood and wants them to escape Sotoba together. Tooru is too hungry and attacks Natsuno a second time. After the second attack, Natsuno's anaemia has gotten so bad that he has become bedridden. Tooru once again visits late at night, still conflicted with the whole ordeal. He tells Natsuno that he's really sorry and cries. Natsuno tells him that it's okay and accepts his fate.

The next morning, Natsuno's father finds that Natsuno has died. After Natsuno's death, Tooru visits Natsuno's bedroom window every night leaving a flower. The Kirishikis discover this and Tooru is summoned to Sunako. He is terrified. If Yoshie called him he would be nervous and if it was Tatsumi he would most likely expect a beating, but being summoned by Sunako is the worst. Because she and Seishirou determine what the punishments should be, and Tatsumi does the punishing. Tooru remembers how he had to dispose a charred body Tatsumi left out in the sun for a crime that was never told. But it turns out she invited him for coffee much to his confusion and tells him her life story and how hard this life can be. After this, Tooru decides that he will stop visiting Natsuno's house because he still wants to live. Suddenly Natsuno reveals himself to him. He has risen for quite some time now and tells Tooru he can never forgive him for killing him, or the other vampires for that matter. Tooru tells Natsuno the initial plans Sunako has for the village and gives Natsuno other sorts of information. This is the last Tooru sees of Natsuno.

Tooru goes to Yamairi and discovered that Ritsuko has also risen as a shiki. She quickly figures out what's going on and Tooru has to take care of her. Because Ritsuko refuses to drink the blood of humans, they lock one of her collegues in with her. Tooru cannot bare seeing Ritsuko suffer from the terrible hunger for human blood, and pleads her to drink some from her colleague. She refuses, saying that she doesn't want to hate herself for being a murderer like Tooru does. He became furious and threatened to kill her colleague in front of her while probably jealous how she is able to hold on to her humanity better than he did. In the end, Ritsuko manages to convince Tooru to let her friend go. They decide to wait for death together.

In the western mountain, Ritsuko begs Tooru to let Yasuyo go. He tells her that the villagers are killing shiki now, and if they find where they are, they'll kill her no matter what her intentions were. She still wants him to, though.

He brings the key and asks Yasuyo to not to tell anyone before letting her out. She agrees and escapes.

Ritsuko asks Tooru if she can sit beside him and he nods. He asks her if they could go on a drive together when he gets his license. He begins to tremble and she puts her hand on his and asks if he's scared. He replies that he is and puts his hand over hers. They can only accept their fate.

Yasuyo betrays them and tells the other villagers about the huts.

Escaping the house, Ritsuko's colleague tells a group of villagers, who now know about existence of vampires, about Yamairi. When Natsuno later discovers Tooru and Ritsuko, he finds their staked corpses.

Tooru and Ritsuko are discovered along with a lot of other vampires and are staked. Upon seeing the body of his son, Tooru's father pleads to stop the genocide against the vampires. But it doesn't work, the extermination of vampires continues. 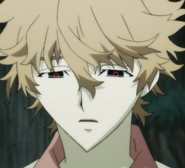 Retrieved from "https://shiki.fandom.com/wiki/Tohru_Mutou?oldid=17352"
Community content is available under CC-BY-SA unless otherwise noted.