"If my son committed a sin, it's my responsibility as a parent to see that he is punished according to his crime!"
―Tomio Ookawa[src]

A towering, muscular, fat, man, Tomio's appearance is just as frightening as his demeanor, and is much larger overall than the other villagers and the Kirishiki. He is usually seen wearing a tan shirt and gray pants, with a merchant's apron worn around his waist. During the Kagura festival, he wears a faded green shrine robe and an obi on his waist over his apron. His beard and eyebrows are wavy and messy, resembling steam or flames rising upwards, perfectly matching his personality, as well as a bald head. He has a propensity to display a furious and, at best, completely focused and stern facial expression.

In the manga, Tomio is much larger than his anime counterpart, to superhuman extent, standing several feet taller than the other villagers, with hands large enough to completely grip and restrain other villagers and shiki. While he uses a large mallet to stake shiki, he is seen on more than one occasion doing so with his bare hands and, in some cases, even just his fingers, as he did so when staking his son Atsushi, and manually pushing small stakes into the hands and legs of Sunako Kirishiki.

On August 11, he recieves a call saying that Megumi's gone missing. He tells his son, Atsushi Ookawa that they're going to look for her, but his son says that they should just leave it to the fire department. He punches him and then is shown going with his son to search the mountain with other villagers.

He is later seen managing his liquor store when Ikumi Itou bursts in and interrupts his business, urging him to join her in revealing the Kirishikis as monsters and the source of the numerous deaths in the village. He dismisses her as delusional and disruptive, and throws her out of his store, noting that she never pays for her alcohol.

Towards the end of the series, he is pouring cups of sake at the kagura festival when he notices the commotion surrounding Chizuru Kirishiki near the shrine. He arrives to find a hysterical Takeo Shimizu asserting that she is indeed undead, and Tomio suggests that he is merely grief-stricken. However, upon actually grabbing onto her arm, he notes the lack of pulse and coldness of her skin, and is quickly convinced that she is shiki. After assisting Toshio and Takeo lynch her, he is among the first to volunteer to join Toshio in ridding the village of the shiki.

The owner of the liquor store. Tomio is an intimidating man and disciplines his son with an iron fist and is able to intimidate him even after the latter becomes a Shiki. He has a strong belief in the unwritten old rules of the village, such as everyone new must greet their neighbors, and becomes increasingly irritated over time as many common rules of Sotoba are unnaturally bent when the Shiki start infiltrating.

He is shown demonstrating notably different extents to his demeanor towards exterminating the shiki in both the anime and manga. In the anime, he is shown treating the hunt as a purely necessary measure in protecting Sotoba, and doesn't seem to be driven by anything other than a sense of duty towards the village and its traditions, and is shown crying immediately after staking his son, Atsushi. In the manga, however, he is shown being much more sadistic and predatory towards the shiki, brushing off the slaying of Atsushi with a smile and merely inquiring as to who his next target will be. When confronting Sunako, he freely expresses his pleasure in eliminating the shiki, likening it to the relationship between predator [humans] and prey [shiki], while leaving this part of his dialogue out in the anime.

When Toshio Ozaki successfully exposes the Shiki's existence, Tomio was one of the first ready to join him in the Shiki's extermination. He later stakes his own son Atsushi, who became a Shiki. When it turns out that Seishin is in allegiance with the Kirishiki, he leads some villagers to assault his temple, killing Seishin's mother and several attendants. At the end of the series, he chases Sunako to the church in the forest and tries to kill her, claiming that she has broken the rules that God has set. He's killed by Seishin, who by then has become a jinrou. Tomio was the most eccentric of the villagers and hunted the Shiki with a passion. 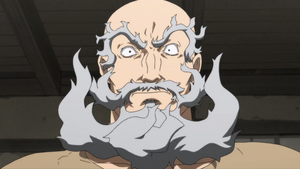 Retrieved from "https://shiki.fandom.com/wiki/Tomio_Ookawa?oldid=18243"
Community content is available under CC-BY-SA unless otherwise noted.