"You're lying! Don't you lie so blatantly in my face! Sunako made a promise to me!"
―- Yoshie Kurahashi, after Shizuka told every remaining Shiki to escape the village in the manga.[src]

She's notably more kind, caring and lenient than Tatsumi in handling the Shiki villagers, as she comforts a distressed Megumi when she learned of Natsuno's 'death'. She is also more open up to the villagers for she sometimes was seen walking or conversing with them.

She also has a responsible side and is known to be reliable, strict and serious, especially during the Shiki slaughter where she led some Shikis to attack people in order to control them without any fear.

In the manga, Yoshie also seems to be absolutely devoted to Sunako and her promise to establish a safe community for the Shiki, as she is seen reacting with extreme conviction and passion when Shizuka relayed Sunako's message for every shiki to flee the village. When she first heard about this, she became so angry that she ruptured a blood vessel in her brain and fell unconscious. In a flashback, she is seen crying in despair while hiding, as Sunako consoled her and insisted that she would soon find a safe place for her and the other Shiki to live. When she finally accepts that Sunako's promise wouldn't be kept, she blows herself up using dynamite strapped to her body to kill off several villagers- a move that may have been to ultimately protect Sunako and any other Shiki as they escaped, demonstrating an unwavering sense of duty toward her kind, despite her hopes and dreams being squandered by the humans.

In the manga, she is shown to have more duties than in the anime. For example, when Izumi came to Kanemasa to prove the Kirishiki family are undead, Yoshie put on a wig and sunglasses to look like Chizuru and a life-size doll that looks like Sunako while they sleep to keep suspicion off.

Hearing the doorbell, Yoshie goes to the gate to answer. It's Seishin Muroi. He says that he believes his father is there and asks to talk to Sunako Kirishiki. She invites him in.

A female servant of the Kirishiki family. Yoshie is an extremely rare Shiki "Jinrou" type like Tatsumi and Natsuno, later also Seishin.

In the anime, she is shot in the head and died during the Shiki slaughter by Seishirou (hypnotized by Natsuno's bite). In the manga, the wound did not kill her, and Yoshie regenerated to health to assume control of the hiding Shikis (albeit with partially exposed brain). She commits suicide by grenades (TNTs strapped at her back in the manga), killing a lot of the villagers. 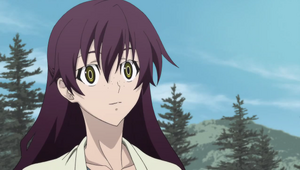 With her hair down; Episode 21.5; As she tells Motoko Maeda to go to the Ebuchi Clinic 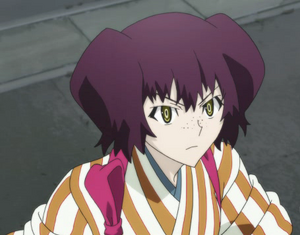 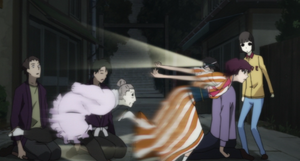 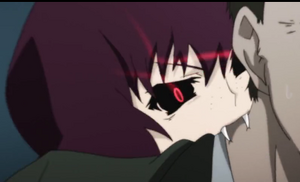 Episode 21; At war with the villagers
Add a photo to this gallery

Retrieved from "https://shiki.fandom.com/wiki/Yoshie_Kurahashi?oldid=17917"
Community content is available under CC-BY-SA unless otherwise noted.