"I threw them away. They're gone. They don't belong in this house. You know how I feel about superstitious religious stuff, don't you?"
―Yuuki, explaining why he removed the talismans from Natsuno's room[src]

He is calm, collected and very protective of his family, especially Natsuno. He and Azusa reject social norms and have never really gotten married. Yuuki hates superstitions and religions, and therefore can't grasp the idea of vampires existing. He has been teaching Natsuno not to believe in such things. In some way, he is indirectly guilty for Natsuno's death.

He had his first child, Natsuno, with Azusa while they were in college. They questioned the value of marriage and never finalized anything on the family register. Natsuno has Azusa's surname for this reason. He, and Azusa moved to Sotoba, dragging Natsuno along with them. In Sotoba they opened the atelier and worked there as a carpenters. He, along with Tomio Ookawa, Atsushi Ookawa, Takeshi Mutou, Takeo Shimizu, Takami, and other villagers, searched the mountain for Megumi Shimizu. While walking with Mutou, he spots Takami in front of Kanemasa. Takami says that Seishin Muroi and Toshio Ozaki said that Megumi Shimizu might have came up there, so he wanted to ask them if they seen her, but he got nervous dealing with people from the city, so he asks Yuuki to ask them, since he's from the city and he agrees. Using a PA system, he says that they're looking for a high school student and asks if he could ask them some questions. Tatsumi asks them to wait a moment and then opens the door. He says that nobody in the house has seen her but offers to help search for her, because the master of the house said that everyone should help one another. He says that his name is Tatsumi and he's a servant and asks how he can help. After hearing other villagers gossiping that they might have something to do with it, Mutou tells Tatsumi not to pay them any mind. After Azusa's, and Natsuno's deaths, he goes insane, getting worse when Natsuno resurrects as a jinrou to live with him again. He spends the days cooking food for Natsuno since he avoids drinking human blood. Tatsumi goes to his house and rings the doorbell. Yuuki stabs him with a knife and is overjoyed to have killed one of the undead. He laughs maniacally however the wound doesn't hurt him and Tatsumi asks to come in. Yuuki is happy to oblige and it seems he doesn't care to let Tatsumi in the house. As Tatsumi and Natsuno talk, he makes turtle soup for Natsuno. When Natsuno is being dangled over the pit by Tatsumi, Yuuki approaches them from behind and shoots the latter, maniacally cheering to himself for punishing the person who is bullying his kid. This distracts Tatsumi long enough for Natsuno to attach a handcuff to him and himself before dragging the both of them down into the pit to their demise. Yuuki waves goodbye to Natsuno while he tells him to take care and falls out of view. He somehow survives the fire and regains his sanity. He and Kanami along with Yasuyo go into the bus to leave Sotoba. He sees Kaori and Akira and smiles. It is implied he would look after them afterwards. 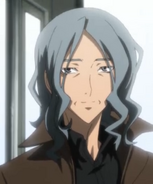